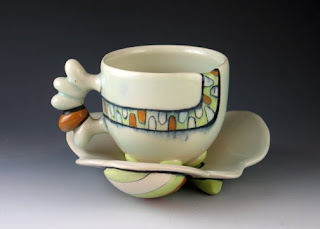 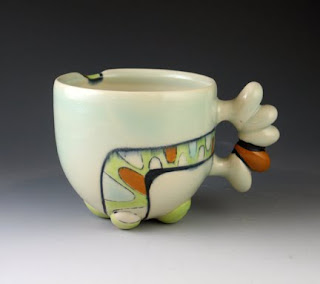 I spent a lot of time this past year obsessing about my handled cup form. I made several grossly unsuccessful (and frankly un-sellable) attempts at reinventing the cup, in an attempt to have it speak the same language as my other pottery forms. Anyone who peeked into my studio looking for cups, surely walked out with wrinkled eyebrows, scratching their heads. I am going to spare you the cups that didn't make it to sale status, and instead post the two cup-forms I feel most successful about. The first, a cup and saucer, features a beaded handle that is tedious to make, but surprisingly comfortable for the one-finger grip. I have a passion for form and design and enjoy bringing a touch of the unexpected to functional ceramics.

The second form is a very simple, generic form that lends itself to illustrated surfaces. The contours of this cup shift smoothly from one angle to the next, meaning no surface of this cup is unavailable to an illustration. In fact, what I enjoy most about this form is being able to wrap the drawing around the bottom. The stories illustrated are of creatures engaging in some sort of play activity: roller skating, dancing, jumping on a trampoline, playing with a ball. I love that the illustration is not fully visible to a spectator until the cup’s user drinks the last drops of liquid from the cup, fully exposing the bottom and the entire picture. 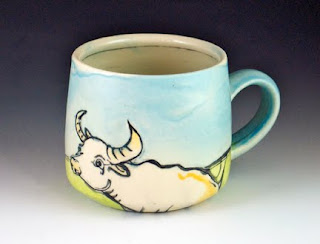 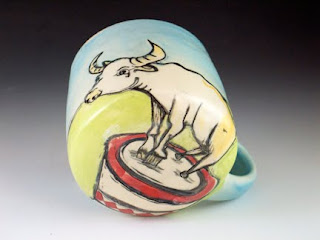 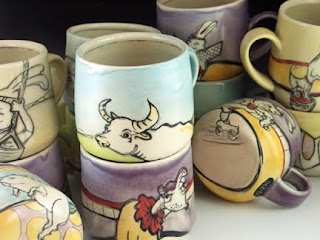